Basically I just did the tasks I was assigned initially. So I went to the Ideal-helper and party games sites and chose two blogs – one for each – to read and commented on them both. Then I took a lunch break. The TimeProof was still on at that time but after a while it got suspended. Then I wasn’t able to log in since the connection failed or something.
Here is the screenshot I took of it: 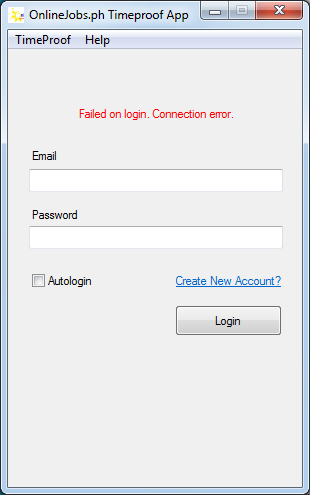 But I went on still. After so, I checked out the progress of my RescueTime dashboard. Still, not much was there since I have been using it only for a while so I decided to simply start with the draft for the review.

Next, I checked out the Ideal-helper and party games sites again so that I can check out other blogs on the rotation and maybe prepare some future comments on them so that I can save time in the following days for this task. But I didn’t check out a lot of sites since I wanted to sort of remember what I’ve read.

Anyway, Gmail was slow too so I cannot ask what else I should do after that. It was raining very hard that day so maybe that was why the internet was slow. Sometimes, things like that happen around here. So since I was already on the site, I started proofreading again. I figured it would be easier for me to proofread a Tier 2 page then its Tier 3 pages and afterwards the content 2.0 pages that are below it. Then send all the corrections as a batch. (I don’t know if it would be easier for Francis' main assistant to correct the articles that way, though. I will make sure to ask later.)

Then I checked out another eBook since I was done with the first one. Then I finally got into Gmail and got main virtual assistant's message that we should chat about other tasks the next day. Also later into the night I got an audio file from Sir Francis, I checked it out and replied appropriately.

Then today, I logged in and checked out my mails. Soon enough Sir Francis emailed and we talked about the social media management. After so I decided to proofread for a while since I left one article hanging the day before. And while waiting for his virtual assistant to log in, I went to an Ideal-helper blog and started commenting on it.

Then he was online and we talked about the tasks. I forgot to log in to Timeproof so I did. It was better this time. I guess it really was my connection yesterday.

Anyway, the chat with Francis' main VA really cleared a lot of things up. As in a LOT. First off, I really understood what I should do with my daily updates when he asked me to check out his virtual diary. I made a mental note to add screenshots starting tomorrow (since I haven’t been doing screenshots of my work since I started). Also I learned that it would be better to jot down the things I’ve done right after I finish them. Yes, that would indeed be helpful. Then I also learned about the High Priority Tasks. I’m glad that I can do something else. I feel so under worked when I’m only commenting and proofreading.

So after our chat, I checked out my email again and learned the Sir Francis sent me an audio file which I didn’t receive. So while waiting for it, I browsed through the Ebook he was working on in preparation for the preface I was going to write. But then I noticed another file that has been sent to my Dropbox not long after. It was about the Amazon task. I just read over it and decided to work on them tomorrow since I want to listen to what Sir Francis was going to say first so I can plan how tomorrow’s gonna go. Then I made an excel sheet for the comments I’m making on the Ideal-helper and party games blogs. It’s on Google Docs.

Tomorrow, I hope to start off more organized. And will make sure to remember what I should be focusing on and all that. I will make sure the daily updates are better than this one and the rest that I’ve sent before too. I will include the screenshots and the estimates of how much each task is taking up my daily 8-hour shift.